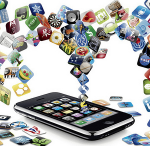 With over 1.3 million apps in Apple’s App Store and another 1.3 million apps in the Google Play store, finding the best apps of the year can be a little overwhelming. Where do you start? One of the best resources on the internet are the ‘Best of 2014’ lists that companies release in late 2014.   As a consumer, you can take advantage of the time and effort that companies have put into evaluating apps and discover apps that you may not know about.  Take a look at four of our favorite lists for the ‘Best Apps of 2014’ below.

Google just released version 2.0 of the Gmail app for iPhone and iPad.  Is it time to stop using the native email app in iOS?  You’ve always been able to sync your Gmail via Google Sync or just via IMAP.   This allowed your email to flow into your native email on an iPhone or iPad.  However, if you have a Google account or Google Apps for Business account, you may want to consider switching.  Here are a few reasons why: